Does Playing Chess Help With Learning?

Chess is a great game that has become very popular in schools. In the United States, many different kinds of chess sets have been made available. These sets include several small items like a chessboard, chess pieces, etc. These chess sets are often used by students or by kids at home to play their own version of chess. 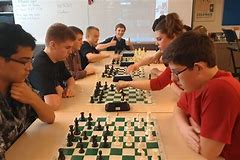 There are many who love this game and especially in schools chess is one of the more popular games that children will play. While there are many reasons why playing chess for kids can be good for their development, there are some disadvantages of playing chess such as becoming overly competitive So before playing, you should be sure of which one is most important to you.

One of the first advantages of playing chess is that it provides a lot of opportunities for students to interact. If you are concerned about the amount of time your child spends at school, playing chess during lunch time can help them finish their work in less time. This can be a great benefit for students who spend most of their time in class. It can also save teachers the effort of having to teach during break times.

Chess is a game of strategy and not just a game of luck. This is important when it comes to developing the mind of a child and improving its reasoning skills. Even adults who have lost the ability to reason do find themselves challenged by trying to figure out what to do next.

Frequently Asked Questions About the Game of Chess

In our line of work, we get asked an awful lot of questions about the most widely played game in human history and at...
Read More

A chess set is something that can be found in countless homes around the world and the game itself has been played fo...
Read More

Chessboards that are hand-inlaid are great for players who enjoy sharing their love of the game with others. They m...
Read More

Official Staunton are purveyors of innovative collectible Staunton Chess Sets. We continually strive to push the boundaries of excellence whilst maintaining the integrity of the craft.

We trust you will enjoy your chess set and that it brings you many pleasurable hours of game play. We are also very pleased and excited to announce the addition of the fabulous Official Staunton range of limited edition chess sets, to our catalogue.